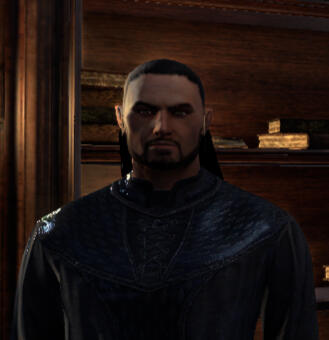 Vinnric is a seeker of knowledge, artifacts, oddities and contacts. From a mundane view, he owns a bookstore with his wife Morithabd by the name of Shrouded Tomes and Treasures, located just outside of Kvatch city proper. He takes great joy in the collection they have amassed for sale and is often seeking new and interesting tomes and items.

For those trusted, and vetted, the store sells more interesting items, including enchanted pieces, artifacts and oddities that those in magical and monstrous circles would appreciate.

Beyond what most see as a shopkeeper and scholar, Vinnric works behind the scenes with the Ravenblood.

Vinnric is well-dressed in tailored clothing, taking obvious care in his appearance. He has a friendly-charming demeanor and warm smile, most often eliciting trust in those he meets.

Enchanting - Vinnric has spent years honing his craft, learning the application of runes, expanding beyond, and seeking interesting results and combinations.

Scholar and researcher - What's a vampire to do through all the years, read of course. Vinnric grew into his scholarly ways over the years. A reader in life, after undeath he often gets caught up in his research and enjoys collaborating with others with like-minded pursuits. He is most interested in magical studies, history, and military tactics

Practioner of Magics - Particularly skilled in Destruction, Shadow Magic, and Illusion, Vinnric also dabbles in other schools, including Restoration, which has piqued an interest in Blood Magic.

Duelist/Battle-mage - Vinnric was a warrior before becoming a vampire, all those many years ago. He enjoys sparing and fighting when he has the opportunity and works to keep his skills honed. when he fights it's with two blades accompanied by magical and vampiric abilities.

Vinnric shares a sprawling cavern with his wife Morithabd beneath a forest she protects, on the border of the Reach. He has assisted when Reachmen have threatened the land in the past, and in other times of need.

The first iteration of Shrouded Tomes & Treasures was a tiny storefront located in Evermore that could barely fit a fifth of their stock. With the assistance of a friend, Morithabd and Vinnric relocated their store to the Kvatch area several years ago.

Have a good one.